Go through a wall… without knocking it down

A nice effect, which lends itself to many uses in the production of films, consists in making an actor cross an obstacle such as a wall. Can our actors go through the walls? Of course, with the Kdenlive superpowers.


One of the most common elements in the world of science fiction and fantasy is the ability of some characters to pass through walls, in all its forms. Sometimes it is used as an expedient for escape from captivity, or as a tool to reach places and complete an important task. It is always something of great effect, because it breaks a very strong belief for the public mentality: the idea that a wall or a steel cage may be enough to block a person. From a conceptual point of view, it is a form of teleportation that takes place on a fourth dimension. It is an idea that physics enthusiasts like a lot because it is realistic, since even in real life we ​​could go through the walls if only we found a way to move in a different spatial dimension from the three that we are used to using. In fact, we travel in a three-dimensional world: width, length and height. But, according to physics, it is only our interpretation: in fact, it is possible that there are other dimensions that our brain cannot see. To give an example, imagine a car on a flat race track: the car can only move in two dimensions, that is, right-left and forward-backward. It cannot use the third dimension, i.e. above-below, because it cannot fly. Now imagine that at a certain point of the track there is a wall that obstructs it: the car could not pass. But if instead he was able to use the third dimension he could easily climb over the obstacle by passing over it, and then continue his run on the rest of the track. With the same logic, if it were not possible to climb over the wall through the third dimension (the height), the fourth dimension could be used to get around the obstacle. Of course, the problem is that so far we have not been able to find a way to take advantage of a possible fourth dimension. And we probably won’t, because the other spatial dimensions are likely to be too small to allow a person to pass through. Only scientific research can definitively resolve the issue in the future. Meanwhile, alternatively, we can pretend to be able to go through a wall thanks to the computer graphics effects of Kdenlive. The effect is quite simple in itself: just use the rotoscope, which we have already learned to appreciate in previous tutorials. We just need to shoot our actor who throws himself against a wall, and then film the room without the actor. By superimposing the image of the empty room on that of the actor, cutting the first (with the rotoscope) at the point of “impact” of the actor against the wall, we can give the illusion that the character has entered the wall itself. This is true if the actor is caught on the side. If, on the other hand, it is taken from the front, the trick is even simpler, because it is enough to use a wipe-like transition to make the actor appear “in spots”. This trick can also be reused for many other situations, such as the passage beyond the mirror (in case you want to make a movie based on “Alice in Wonderland”) or through other objects to make the idea of ​​a ghost. As always, you can see the example video at the following address: https://www.youtube.com/watch?v=bzmp0pJdQ70 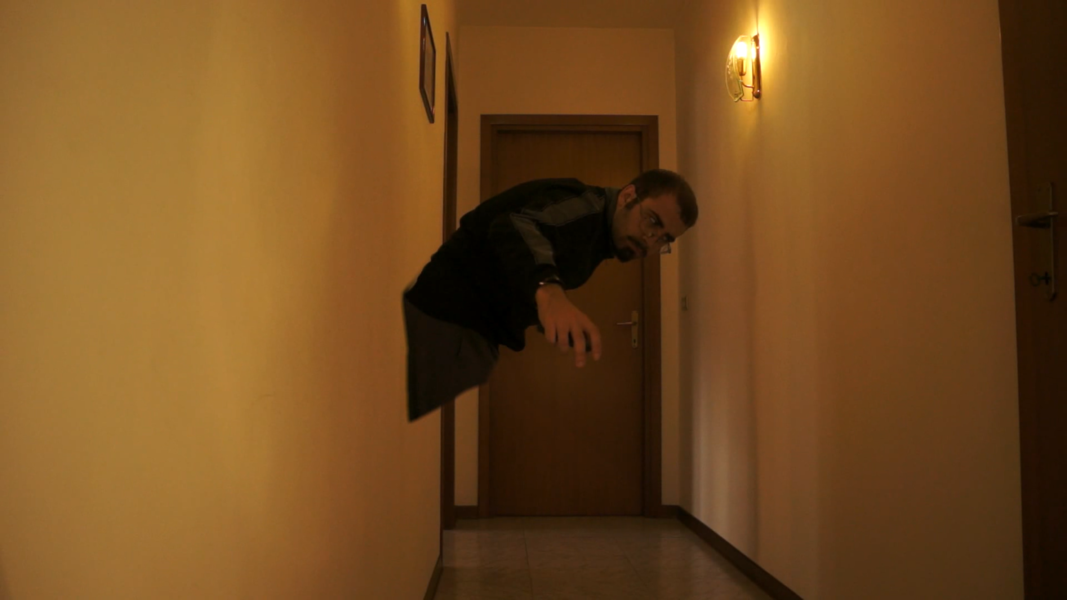 The actor appears halfway up the wall 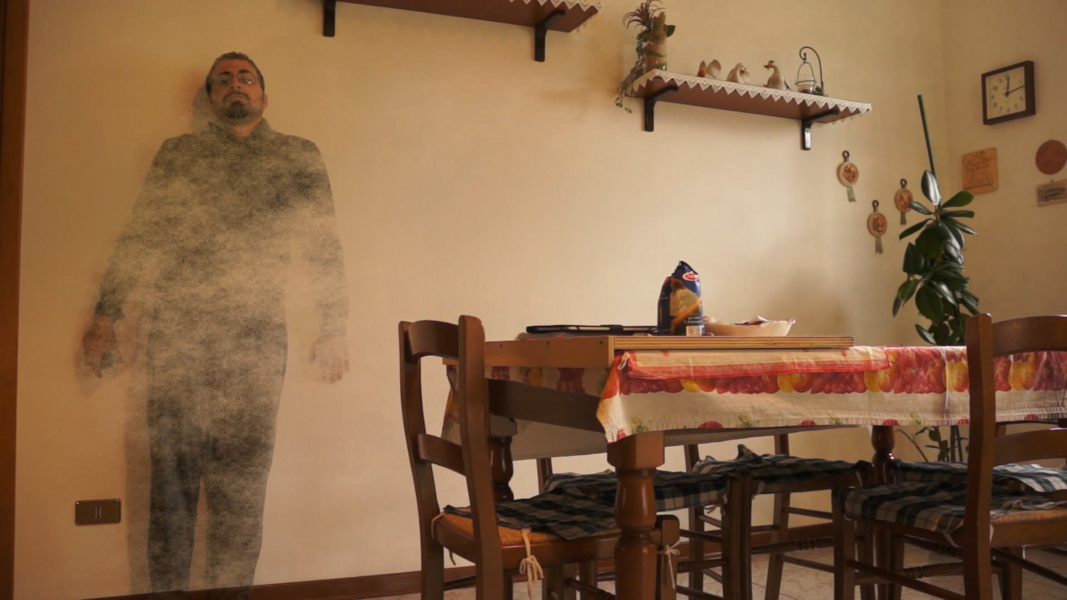 The actor appears “in spots” from the wall

Beware of the light…
In order for the effect to succeed, it is essential that the overlapping shots, that is the movie that contains the actor and the one that does not contain it, are practically identical. The two shots must differ only in the presence of the actor, all the other objects must appear in the same way, and this means that the lights must also be identical: one shot must not appear brighter than the other. For this reason, it is advisable, if possible, to shoot scenes with manual settings (exposure and aperture, as well as focus) so that they cannot change between shots. Furthermore, always if possible, one should try to cancel the sunlight, working only with artificial lamps. In this way, obviously, when choosing a certain lighting (position and power of the bulbs) we are sure that it cannot change due to some passing cloud. It is also important to pay attention to the shadows: the scene should be illuminated so that no shadows are cast by the actor on the wall. Otherwise you would notice the difference between the shot in which the actor is present and that in which the actor is not there.

Let’s put the clips in place

Let’s start the effect by correctly positioning the video clips 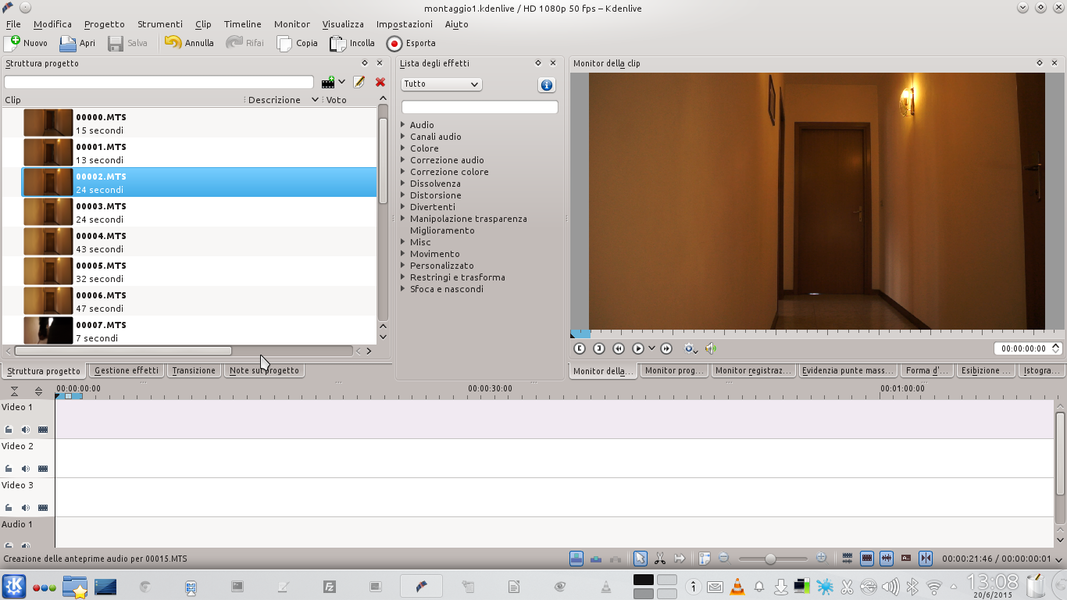 1 ALL SHOOTINGS – In order to start, we must first upload all the video files into a new Kdenlive project: we need both the filming of the room without actors and those in which the actor throws himself against the wall. 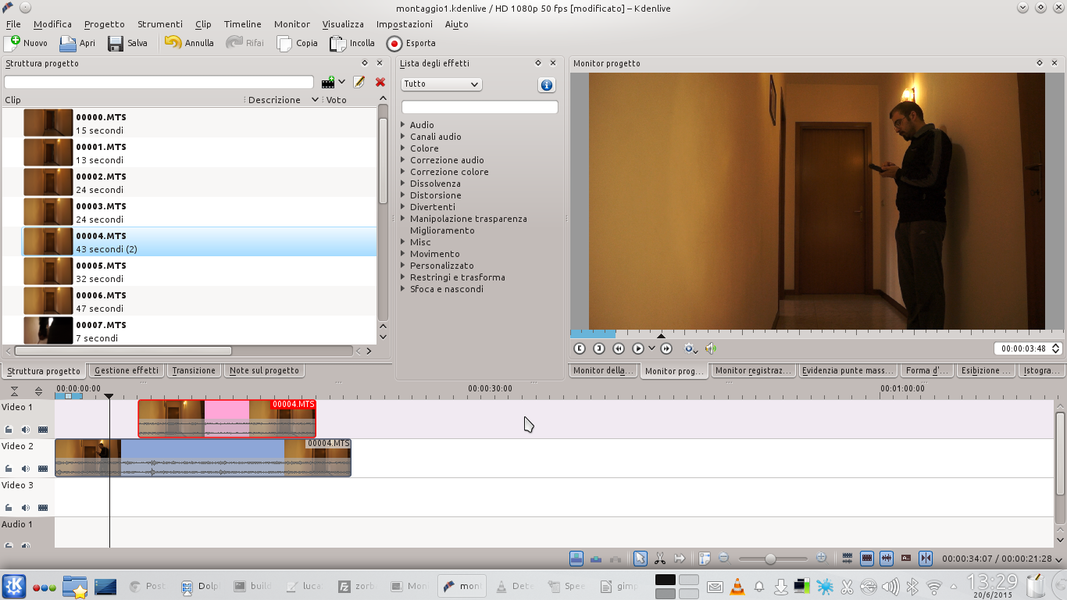 2 ONE ABOVE THE OTHER – Let’s start with one of the shots that frame the actor sideways: we load the track Video2 the clip containing the actor and in the track Video1 the relative recovery that concerns only the empty room.

And the actor disappears

We build a wall that “swallows” the actors 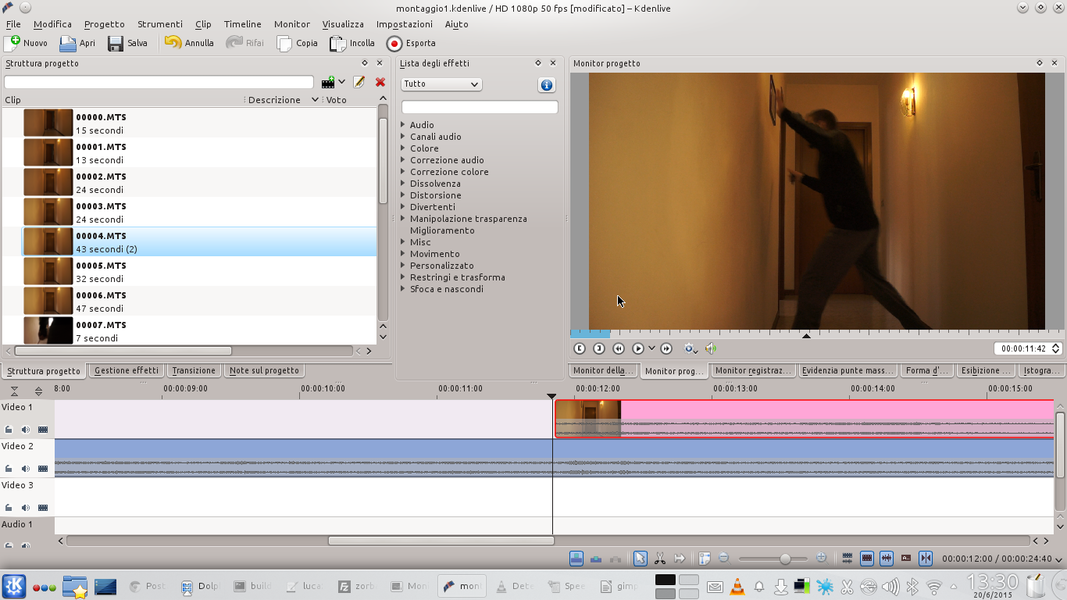 1 IN THE RIGHT PLACE – If necessary, we cut the clips using the tool Scissors , and let’s move them: what we want is that the clip containing the empty room is positioned so that it starts exactly when the actor has to start disappearing. 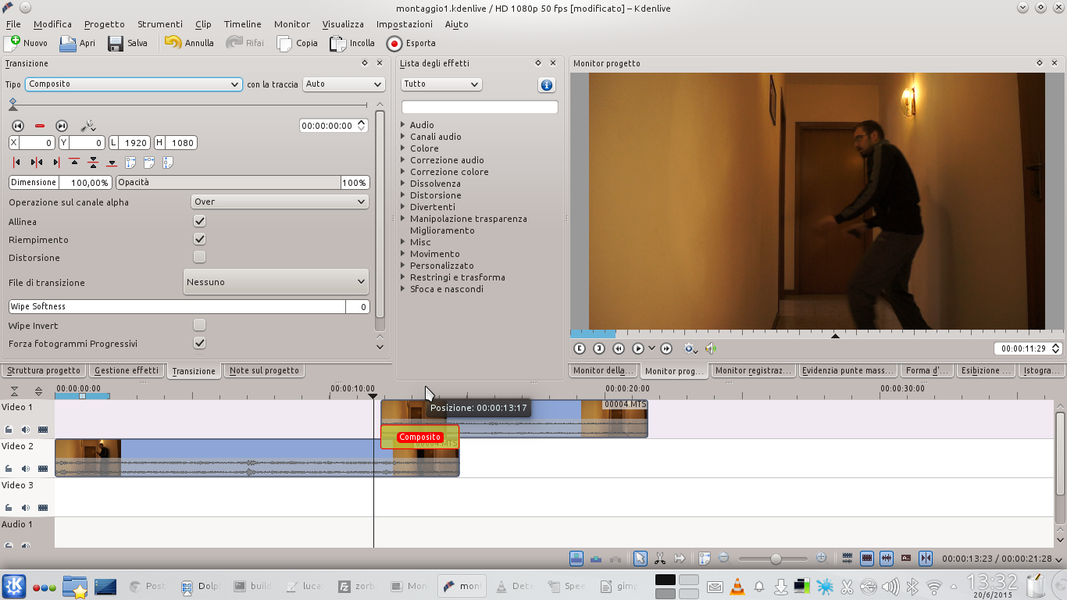 2 COMPOSITION – Having found the right moment, or the moment when the actor touches the wall for the first time, we add a transition between the two clips. The transition will have to be of type Composite , because we want an overlap. 3 THE ROTOSCOPING – We add to the upper clip, that is the one that contains only the empty room, a type effect rotoscope . As soon as we add it, we have to draw in the Project monitor a shape that represents the portion of the wall that will be superimposed on the actor 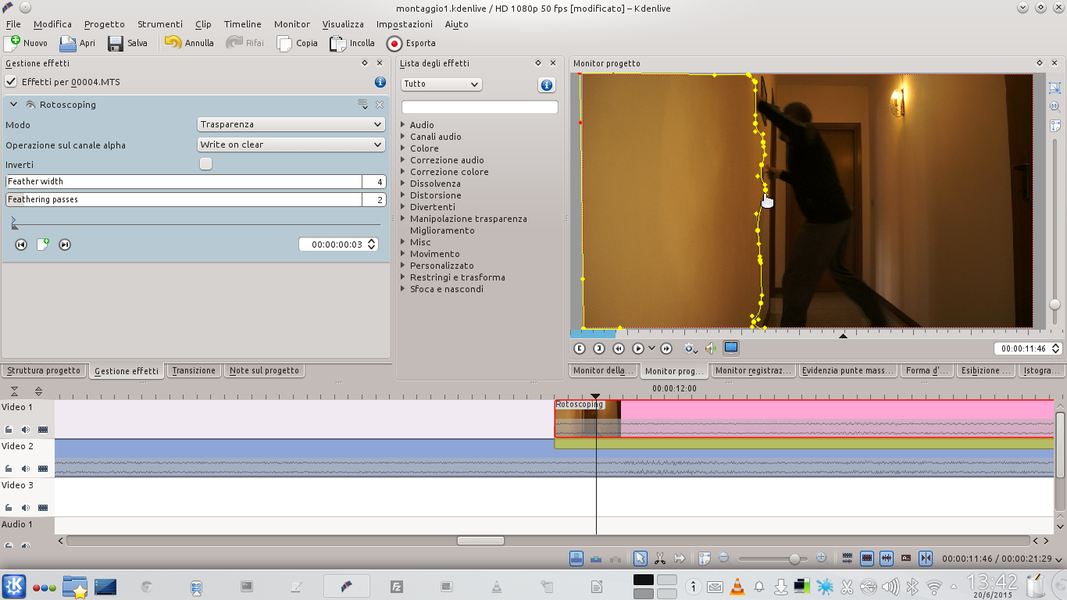 4 IRREGULAR FORM – What will happen is that the actor will seem to “slip” into the wall precisely in the position in which we draw the outline of the effect rotoscope . To give more credibility, we create new key frames in order to modify this outline and make it less regular.

Some tweaks for a “realistic” disappearance

We improve the quality of the effect with a “curtain” transition 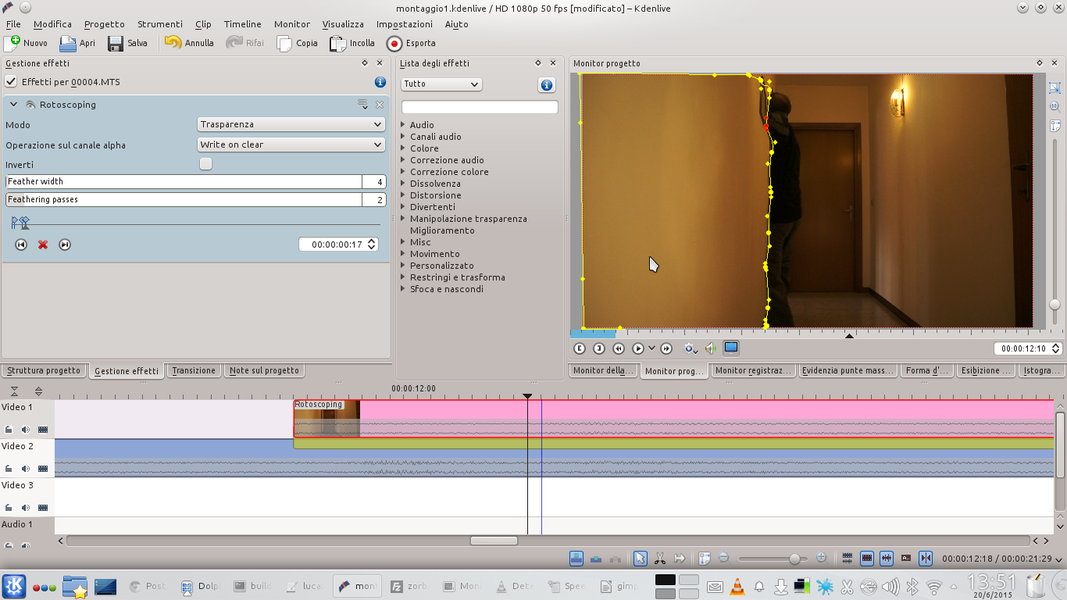 1 THE LAST FRAME – When we have almost disappeared, by overlapping the wall clip thanks to the Rotoscope effect, we can stop modifying the key frames of the effect. The feather width can be set to 4 , while feathering passes a 2 . 2 THE SAME CLIP – Let’s add to the track Movie3 the same clip that we had inserted in Video1 . This time, however, we position it so that it starts the moment we stop changing the key frames of the effect rotoscope of the clip Video2 . 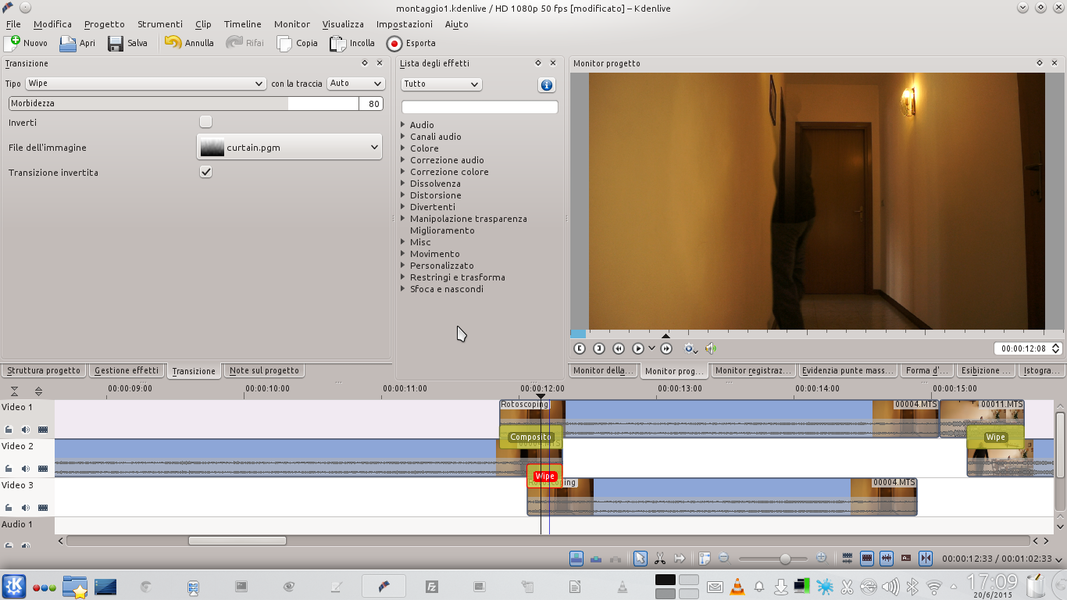 3 THE CURTAIN DOWN – Now let’s place a transition between the track clip Video2 and the Movie3 . The transition must be of type Wipe, with image curtain and tick it on Inverted transition . There Softness should be brought to value 80 . 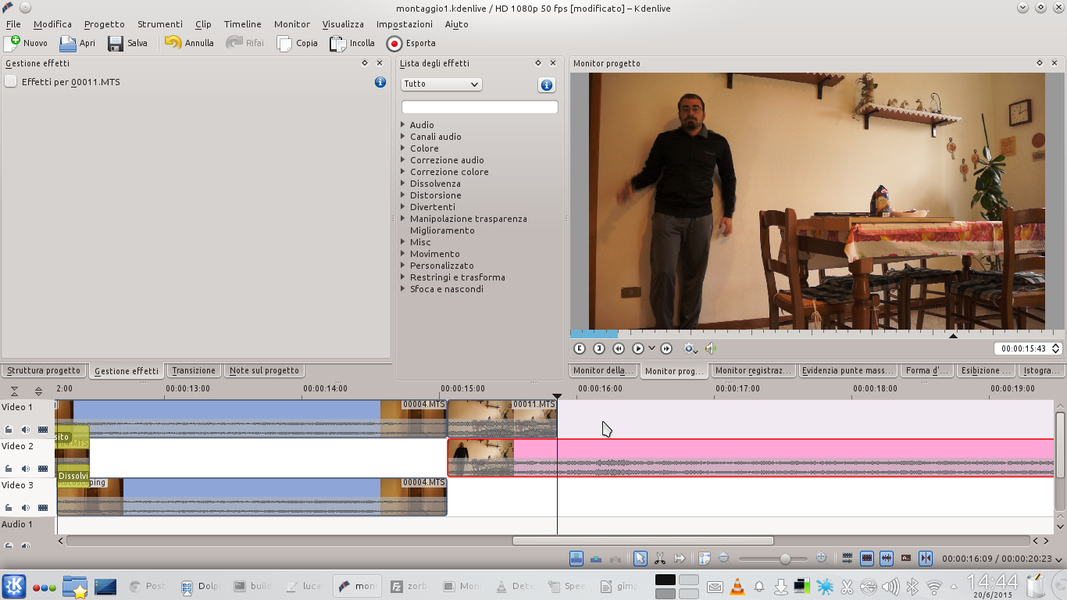 4 THE RETURN – This effect has ended. Now we can start the next one, which is the one in which the actor reappears from the wall in the next scene. This scene is shot in front of the actor. We insert the clip with the empty room in the track Video1 and the one with the actor in Video2 .

And now the actor appears on the other side 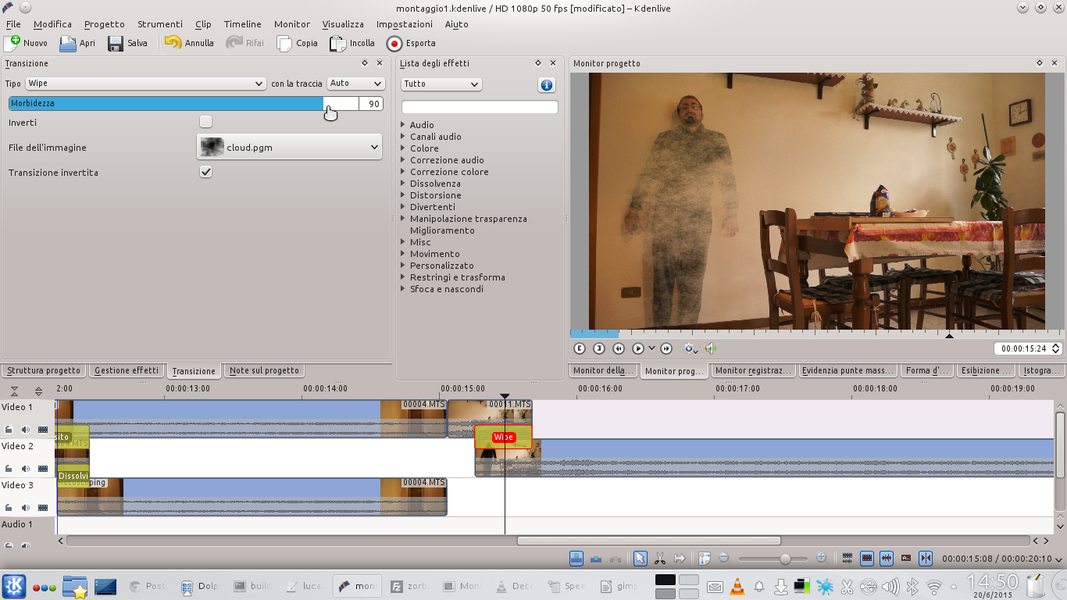 1 APPEARS IN STAINS – We insert a transition between the clip with the empty room and the one with the actor Wipe . The image to choose is cloud , and the softness must be set to the value 90 . In addition, we need to tick Inverted transition . 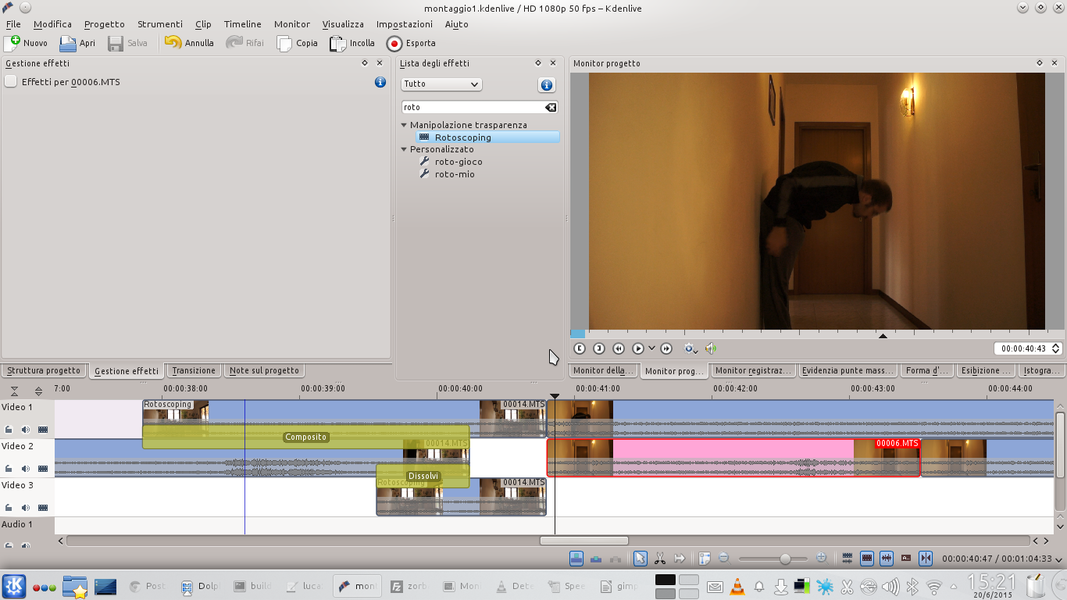 3 STILL COMPOSITE – Here too, we add a composite transition between the two clips, so that they can be superimposed. The transition should be stretched so that it covers the entire extension of the clip containing the actor. 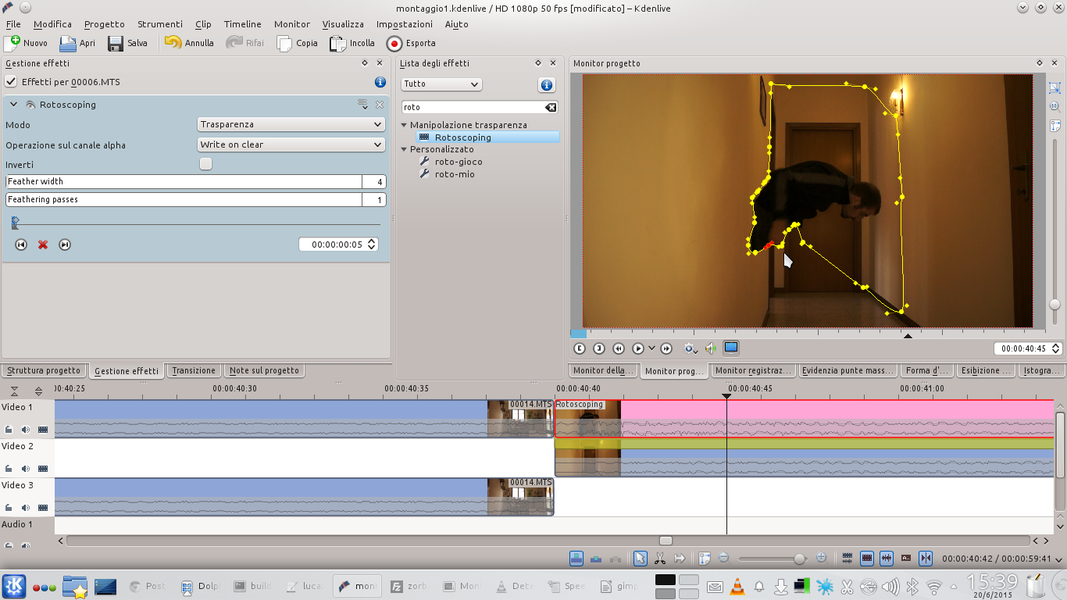 4 WITHOUT THE LEGS – Let’s add the effect to the clip containing the actor rotoscope . We have to draw the outlines of the effect in order to cut the actor’s legs with a vertical line or almost. In this way, we give the illusion that the legs are on the other side of the wall 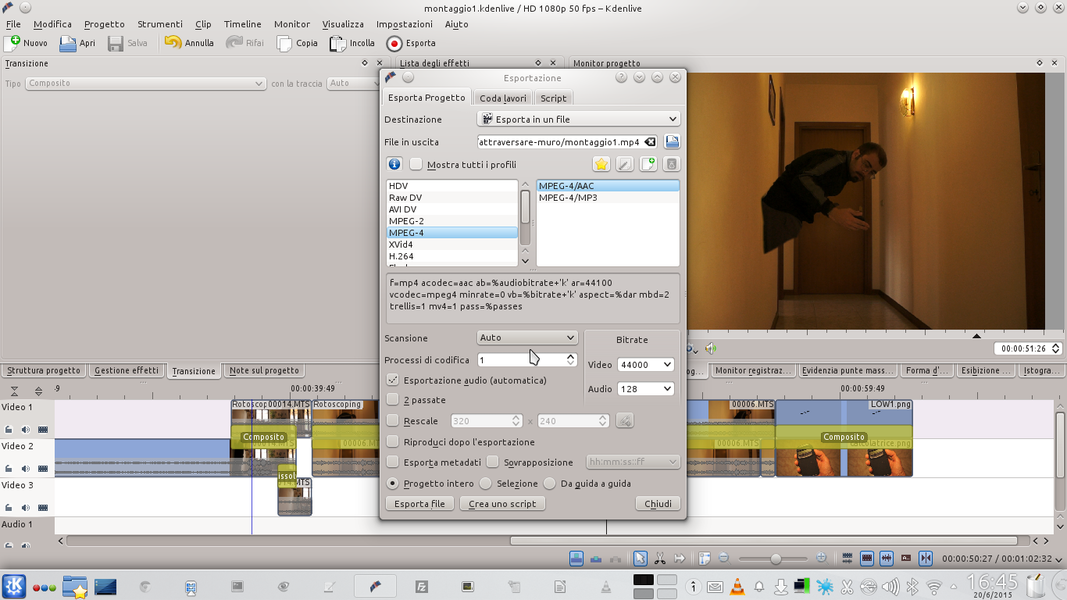 5 THE MORIBDA LINE – If necessary, we add other key frames to follow the movement of the actor’s arms. We can set it up feather width at 4 e feathering passes a 1. Once the effect is over, we can export the film made so far. 6 A FAST CUT– To improve the result, we open open the video file just exported to a new Kdenlive project, and cut from the video the final part of the actor’s disappearance and the initial part of the reappearance. Thus, the transition between the two scenes is faster and more likely.
Luca Tringali
VFX
No Comments
Tags:
fadefantasykdenliveobstaclepassing throughsuperpowervideo editingvisual effects